On Friday, Jan. 29, Brent Groome received the Order of the Palmetto, the highest civilian honor in the State of South Carolina. Rep. Kevin Hardee, Sen. Greg Hembree, and Sen. Luke Rankin presented the honor on behalf of Gov. Henry McMaster, recognizing Groome for his 30 years of service to HTC and hi 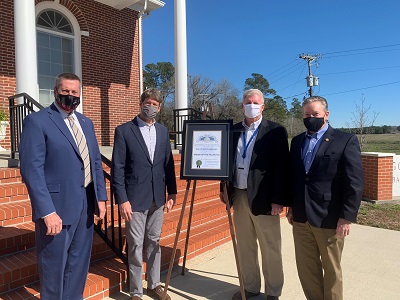 s contributions to the state and the telecommunications industry.

Throughout his career, and most recently as Chief Executive of Corporate Communications and Government Relations, Groome has led HTC in supporting the local educational system, staying true to the Cooperative’s values and mission, and being the industry leader for improving broadband access to rural communities across South Carolina.

“As Horry County has grown, and our region has grown, it has been critical that HTC be on the front end of the newest, greatest technology,” Sen. Hembree said. “Brent has been a leader on broadband in South Carolina and in our area to the point that nearly 100% of Horry County is served by broadband. Brent also has a passion for education and our children and understanding how critical the opportunity for a high quality education is for every child in South Carolina, particularly in Horry County.”

“At the beginning of the coronavirus pandemic, Brent was at the forefront of the conversation with state leaders and internet providers to help connect our students at home and facilitate collaboration across the state,” Sen. Rankin said. “Horry County shines in many ways statewide, particularly in the telecommunications world, and that is not accidental. HTC and leaders like Brent have helped us shine by helping people get things done and helping us advance our region.”

“Our state and local leaders have always looked to Brent for insight on industry-related issues,” Rep. Hardee said. “He has a keen ability to see every side of the issue, and propose alternative solutions that few have considered.”

“The impact HTC has on its local community, the integrity of its employees, and the changes seen in South Carolina’s movement toward broadband for all would not be what they are today without the leadership and expertise Brent brings to the table,” said HTC CEO Mike Hagg. “He has guided the Cooperative through three decades of change and pioneered innovation that will shape the future of HTC.”

Groome was both surprised and humbled by the honor.

“It’s not about me,” he said. “My accomplishments pale in comparison to what HTC employees do every day to improve the communities where we live and serve. My time has been richly rewarded and I have been truly blessed to work with some terrific people over my tenure on the local, state, and national level.”