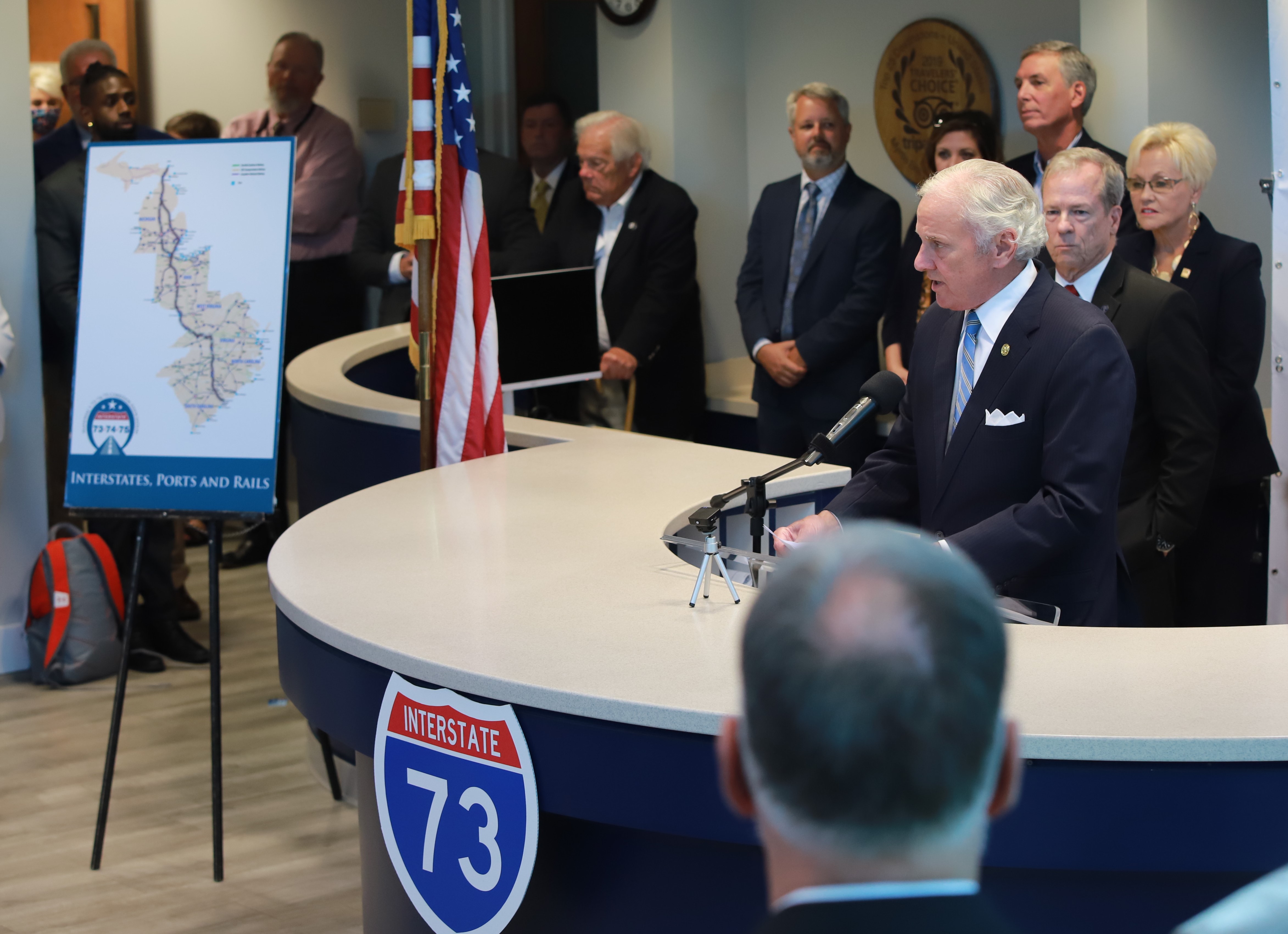 Gov. Henry McMaster was joined Monday by S.C. Department of Transportation (SCDOT) Secretary Christy Hall, members of the General Assembly, and local Horry County elected officials to call for the expansion of Interstate 73 (I-73) in South Carolina. The governor’s proposed $300 million investment would be funded through a combination of South Carolina's share of American Rescue Plan Act (ARPA) dollars and non-recurring dollars from the state's projected $1 billion budget surplus for the fiscal year 2022.

“If we seize this moment by thinking big, being bold, and making transformative investments, I believe we can change South Carolina’s future for the better,” said Gov. Henry McMaster. “I can think of nothing more transformative than the state committing the first $300 million to kickstart this critical project. It is my hope that this commitment will serve as a catalyst for our local government partners to finalize their investment plans and will strengthen the position of our congressional delegation as they work to secure federal funding, so that we can finally make I-73 a reality.” 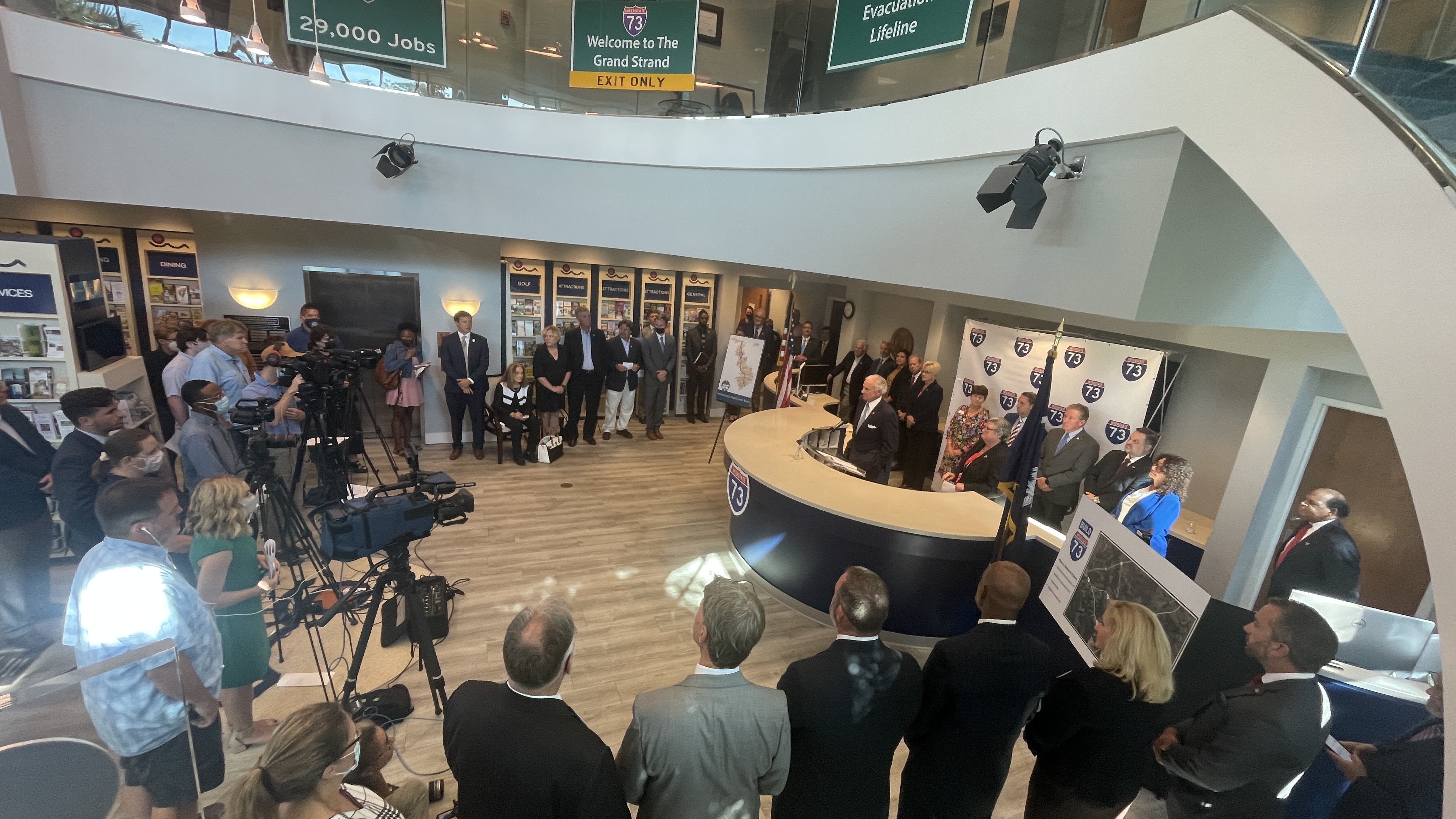 The total cost of the expansion is estimated at $1.6 billion. With the state being the first to commit to funding the project, it will provide local and federal government partners the assurance needed to finalize their own investment plans for I-73.

“I-73 is one of the most game-changing infrastructure projects in our state,” said U.S. Senator Lindsey Graham. “I appreciate all the support of Governor McMaster, Secretary Hall, Congressman Rice, and the entire delegation. We need to responsibly fund our roads, bridges, and ports to make sure that taxpayer dollars are spent in a beneficial way. I-73 meets that test.” 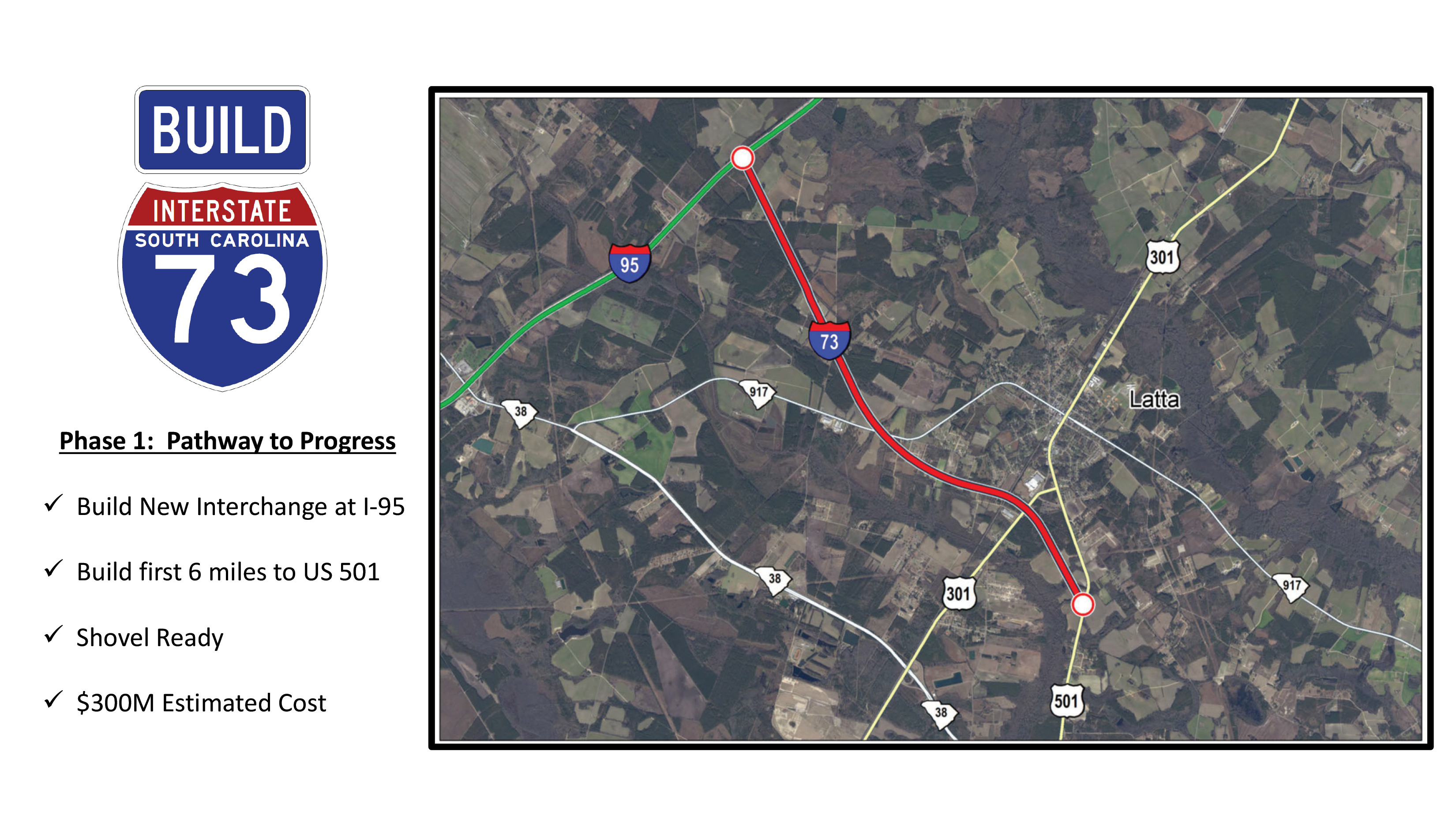 transformative for the state by increasing connectivity and safety in the region, while also providing new jobs and growing our economy. I look forward to continuing to work alongside Governor McMaster and my colleagues within the South Carolina congressional delegation as this project gets underway,” said U.S. Senator Tim Scott.

“The improved movement of freight, people, goods, and visitors that will be brought about by I-73 is essential in this area,” said S.C. Department of Transportation Secretary Christy Hall. “If you think about the connection to the new port in Dillon, all of those elements come together to create a true multimodal movement of goods and people in this area. I echo the governor’s call to invest in this very important project. We are ready to move forward with phase 1 of this project with an initial investment of $300 million to build the segment from I-95 to US 501.”

“Today’s announcement of new investment in I-73 is a testament to the opportunity and prosperity this road will bring to the Grand Strand and Pee Dee. Since I came to Congress, I’ve worked to clear many hurdles for I-73 and was proud to secure the Army Corp of Engineers permit.  I’m proud to see that today, we are one giant step closer to securing jobs, attracting industry, increasing safety and connectivity, and growing tourism. After all, highways are the backbone of economic development and commerce in the United States. I thank Governor McMaster and Secretary Hall for their support of this transformative project,” said Congressman Tom Rice.

“The bottom line is that the Grand Strand is the heartbeat of South Carolina’s tourism industry,” said S.C. Department of Parks, Recreation & Tourism Director Duane Parrish. “It’s critical that we have another artery that leads to that heartbeat – both to bring visitors in and to get them out in the event of a hurricane evacuation.”

According to guidance from the U.S. Treasury, up to $453 million of the American Rescue Plan funding for South Carolina can be utilized to fund road projects. In September, Governor McMaster announced a plan to use $360 million in ARPA funds to accelerate the widening of I-26 from Columbia to Charleston.

“The time is right for us to make I-73 a reality,” said Myrtle Beach Mayor Brenda Bethune. “Not only is the Myrtle Beach area one of the top tourist destinations in the country, but Horry County is the fastest-growing county in the state and the fact is that we don’t have any interstate connectivity. But that’s going to change. I-73 will provide both our residents and our visitors a safer pathway both in and out of our city, especially during hurricane evacuations and reentry. This road will help us to create more jobs by diversifying our economy and increasing local and state tax revenues. Simply put – I-73 is great for everyone and it is our pathway to progress.”

“I-73 is a critical roadway for our future,” said North Myrtle Beach Marilyn Hatley. “It will provide our residents with greatly enhanced evacuation routes when hurricanes and other potential natural disasters require us to leave. It will provide a more direct link to the Grand Strand for use by our visitors.

The above press release was distributed by Gov. Henry McMaster’s press office.