A&I Fire and Water Restoration was awarded a 2021 National Chrysalis Award for their work on an extensive residential insurance restoration in Pawleys Island. A&I was one of 70 companies across the nation to win the award. Entries were judged on overall design, the creative use of space and materials, and the degree to which the project enhanced the original structure.

This year’s award was based on A&I’s performance in an established gated community in Pawleys Island where they were selected as the contractor to perform a complete structural demolition and reconstruction to a beautiful custom family home. The home was damaged by a fire that spread throughout the entire house with costs totaling $1.8 million. A&I has won 14 National Chrysalis Awards in the last two decades.

Rob Clemons, general manager of Monarch Roofing, was named the Builder of the Year by the Home Builder’s Association of South Carolina. The award ackowledges leaders for their tireless service to their community, the home builder’s association and the home builder industry.

Carolina Trust Federal Credit Union announced the promotion of Quentin Pickett to director of facilities management. Pickett was hired as facilities specialist in Sept. 2019. The U.S. Navy veteran previously worked in HVAC and maintenance before working for Carolina Trust.

The credit union also welcomed Colleen Caranfa as the new branch manager of the Surfside Beach location. Caranfa previously worked at M&T Bank in Connecticut as AVP and branch manager. SHe brings 18 years of experience in the banking industry.

Steve Carr, general manager of Dave & Buster's Myrtle Beach, was elected to the board of directors for Make-A-Wish® South Carolina.

Brad Berry was named general manager of the Pro Football Hall of Fame in Myrtle Beach. Berry has worked at the exhibit since it opened in the summer. He is a former professional dancer with All That! and The Carolina Opry. He started in the new role Oct. 18. 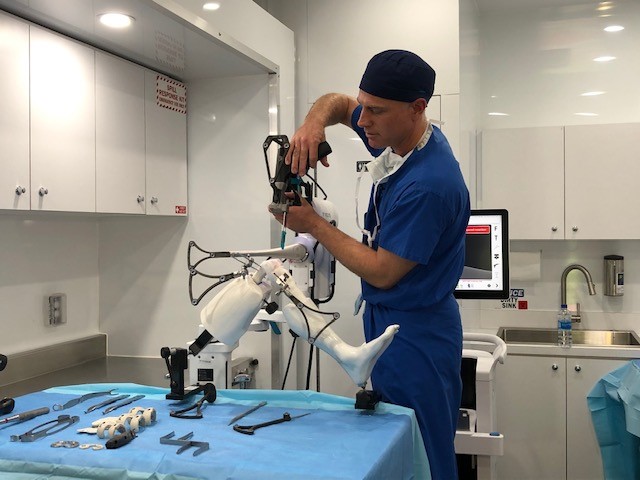 OrthoSC recently became the first in the area to offer robotic knee replacements in their outpatient surgery center. Learn more.

Picture on the left submitted by Ortho SC shows a doctor demonstrating the new robotic knee equipment on a plastic knee.