MYRTLE BEACH, S.C.—On January 19, 2022, South Carolina Governor Henry McMaster made his annual State of the State Address at the State House in Columbia, S.C., where he spoke—in part—about the state’s booming economy and how to best utilize the state’s surplus and federal funding.

The governor directed the General Assembly to provide no less than $1.26 billion to the South Carolina Department of Transportation to accelerate construction, expansion or improvements to state-owned roads, bridges, highways and interstates, including starting construction on Interstate 73 from the Pee Dee to the Grand Strand.

McMaster called I-73 one of the state’s “highest-priority” infrastructure projects and noted that the state’s surplus revenue and American Rescue Plan Act (ARPA) funding provided “a once in a lifetime opportunity” to make “big, bold and transformative” investments like constructing the “long-awaited” interstate.

Following the address, Myrtle Beach Area Chamber of Commerce President and CEO Karen Riordan applauded the Governor for his support in advancing I-73. “We are very pleased that the Governor called for funding I-73 within his State of the State Address. By further giving the project his support, we feel confident that the state of South Carolina is all in for turning dirt on I-73 in 2022.”

Riordan further emphasized the advantages the interstate would have across the state. “I-73 will add jobs, diversify our economy, relieve traffic congestion on local roads, provide a life-saving hurricane evacuation route and provide the state with further revenue—all of which will enhance the quality of life for residents across the Pee Dee and Grand Strand,” she said.

The Governor’s full remarks during the State of the State Address can be found online at Governor.SC.gov.

In celebration of National Small Business Week in May and in continuing efforts to support and engage minorities in business, the chamber is partnering with TD Bank to award membership to minority-owned businesses.

TD Bank is sponsoring the cost of one year’s dues for four minority-owned businesses. The winning businesses and their employees will have full access to all benefits of chamber membership including a listing in the business directory, free job listings on our Job Board, discounts through our money-saving programs and invitations to networking events and education classes. 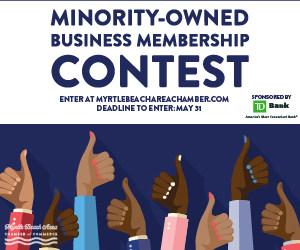