During the annual MBACC Board Retreat held Oct. 18-21, 2022, members of the chamber’s board of directors and senior leadership team traveled to Panama City, Fla., to learn from the Bay County Chamber of Commerce (BCCC), Panama City Beach CVB and other area leaders. The trip south was an opportunity to learn about the region’s hurricane recovery efforts.

On Oct. 10, 2018, Hurricane Michael made landfall 20 miles west of Panama City, becoming the first Category 5 hurricane to strike the U.S. mainland since Andrew in 1992 and the first Cat 5 hurricane on record to impact the Florida Panhandle.

The hurricane reached peak winds of 160 mph and caused an estimated $25.1 billion in total damages. Along the panhandle, Mexico Beach and Panama City suffered the worst damage due catastrophic winds and storm surge.

Nearly four years after Hurricane Michael, the region is still recovering. MBACC leaders were able to see first-hand how the area was impacted by the storm and what local leaders learned from it.

MBACC president and CEO Karen Riordan said the board retreat provided real insight on how a similar coastal community dealt with such a powerful storm.

“It’s incredibly important to have a plan to be prepared but it’s equally important to know what to do once a natural disaster has happened,” Riordan said. “We learned truly valuable information from the Bay County leaders and how their community came together after Hurricane Michael. It was a real eye-opener, and we will use this knowledge to better prepare for storms.”

During the retreat, the chamber board and senior staff toured downtown Panama City and spoke with city leaders and local businesses about their redevelopment during their recovery process.

During a panel discussion, mayors of five regional cities shared how the hurricane impacted their municipality. They described how communication was disrupted from the lack of cell phone service, and how there was no water nor power for weeks. One mayor told the MBACC team to get battery operated radios and extra sim cards for phones because the SAT phones were rendered unusable.

They spoke on the continued recovery efforts and described how some residents continue to live in temporary housing like RVs to this day. In addition to destroying businesses and homes, the hurricane and the tornadoes that spun from the storm, destroyed millions of trees affecting the land’s ability to absorb rainwater. The region remains vulnerable to coastal flooding.

Bay County Chamber of Commerce President Carol Roberts shared said their biggest lesson was how essential relationships are in restoration. “Learn from our community as far as communication and relationship building among community leaders,” Roberts said. “It is key to recovery, and it is key to a prompt recovery.”

Communities have 60 days to get all major requests in to FEMA, so there will be lots of paperwork but it’s critical to do it right and in a timely manner 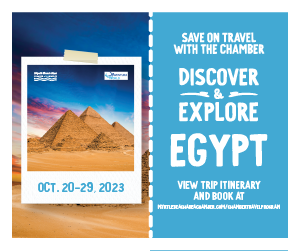