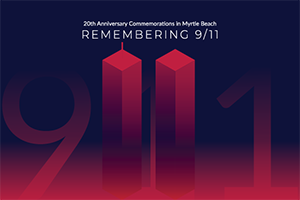 This year marks the passage of two decades since the 9/11 attacks that killed 2,977 people.

Four commercial airplanes were highjacked by terrorists associated with al-Qaeda. Two crashed into the Twin Towers of the World Trade Center in New York City. A third flew into the Pentagon in Arlington, Virginia. Passengers and crew members on the fourth plane launched a counterattack that caused the plane to crash in a field in Somerset County, Pennsylvania.

9/11 remains the single largest loss of life resulting from a foreign attack on American soil as well as the greatest loss of emergency responders (441) in a single day in American history.

Commemorations scheduled on the Grand Strand

If you have an event that should be added to this list, please email Amanda.Blomquist@visitmyrtlebeach.com.