A hurricane warning is in effect for the entire coast of South Carolina. Find updates and resources.

Visit Myrtle Beach has partnered with The WorkShop Content Studios to develop Chef Swap at The Beach, a new cooking competition television series that will highlight the culinary talents of chefs throughout the Grand Strand. As host and judge, Chef Amanda Freitag will pull chefs out of their resident kitchens and swap them into each other’s restaurant to prepare a new dish for evaluation by a panel of judges. Chefs will not know which kitchen they’ll be in or what they’ll be preparing – an appetizer, entrée or dessert – but they will, however, be able to take one ingredient with them.

Chef Swap at The Beach will premier on The Cooking Channel on October 1, 2022 at 7 p.m. Eastern. The fast-paced 30-minute show will run for a series of six episodes airing on consecutive Saturday nights until early November. Chef Amanda will be joined by judges Johanna Wilson Jones, a Myrtle Beach-based food writer and culinary connoisseur, and Dylan Foster, chef and owner of Two Sons Seafood, in selecting the winning chef and dish for each episode.

“From beachside spots and fresh seafood markets to international cafes and fine dining, Myrtle Beach is a culinary destination unlike any other with over 2,000 restaurants offering tried-and-true favorites next to innovative new flavors. The culinary experiences are just like The Beach – full of flavor, welcoming and ready for any craving,” said Karen Riordan, president and CEO, Visit Myrtle Beach. “Partnering with The Workshop Content Studios and Amanda Freitag along with our resident culinary experts Johanna and Dylan to bring The Beach to a new audience is integral to our efforts in showcasing the Grand Strand’s exciting restaurant scene.”

“The chefs in Myrtle Beach really know how to rock their kitchens and bring the heat when it comes to creating new dishes that drive flavors up a notch,” said Chef Freitag. “It’s tough to cook in someone else’s kitchen so Chef Swap at The Beach takes that pressure, adds in the suspense of competition and even gets to the emotion of why these chefs pour their best into their menus. Every episode is filled with fast-paced, heart-tugging drama.”

Known for her work both on and off the TV screen, Chef Freitag has been a judge on Food Network’s Chopped and has appeared on Iron Chef America, Next Iron Chef, Unique Eats, Beat Bobby Flay, and Guy Fieri’s Tournament of Champions, to name a few. She’s on a mission to make cooking more approachable through her cookbook The Chef Next Door. Most recently, she launched a digital series called Easy AF, where she shows audiences that delicious food can be fun, easy, and quick to make right in your home kitchen.

Rounding out the Chef Swap at The Beach judging panel, Johanna Wilson Jones has traveled up and down the Grand Strand tasting the foods that make Myrtle Beach restaurants hum with diners, becoming an expert on the region’s flavors. Johanna is also the host of the Finding our Flavor YouTube series where she highlights the ingredients, foods and dishes that make Myrtle Beach unique. Completing the show’s judging trio is Chef Dylan Foster who offers cooking classes and seafood delivery right from the waters of the Grand Strand’s Murrells Inlet. Chef Dylan also hosts the YouTube series On the Hook exploring the people, places and tales of Myrtle Beach seafood on and off the boat.

For more on Chef Swap at The Beach including behind-the-scenes show photos, featured restaurant locations, chef tips and more on the destination’s culinary scene, visit www.chefswap.com.

Looking for ways to save on your power bill? Then it’s time to check out Empower Business.

Your business is your livelihood and Santee Cooper wants to help keep your budget, especially for power, on track by offering programs to help you make smart energy decisions and rebates for lighting, HVAC, refrigeration, kitchen equipment and more. 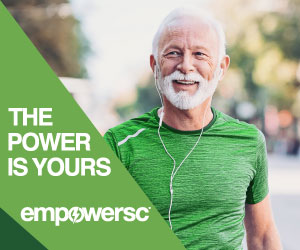